The Transformation of KOKO, an Iconic Music Venue 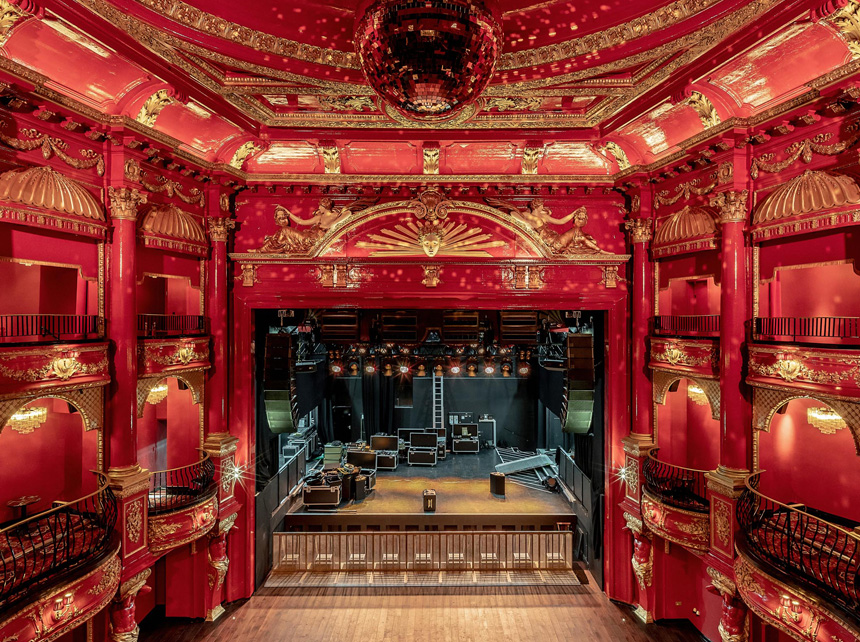 Everyone I've spoken to has a relationship with KOKO or the Camden Palace as it was known when I was growing up. In suburban North London, Camden Palace was our mecca. So, when the project was first discussed at HTS in late 2015, I was determined to lead the redevelopment of the building that had been such an important part of my life. 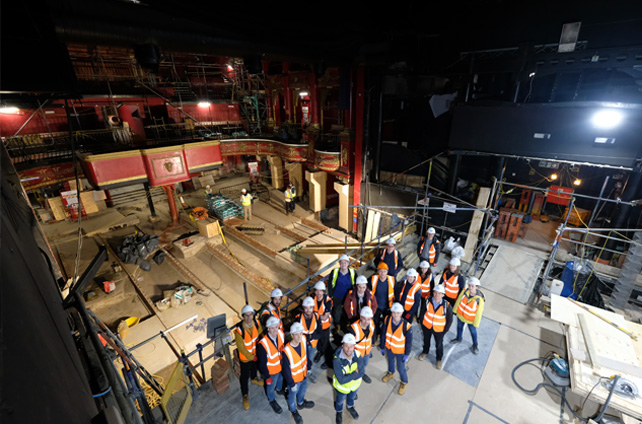 I remember the first site visit and the thrill of walking onto the stage as it was being set up for that evening’s show, drums and amps in place, and taking photographs of the view from the mic stand at the front of the stage looking out across the floor. Although dimly lit, the reality of the project was clear, the place needed some love! 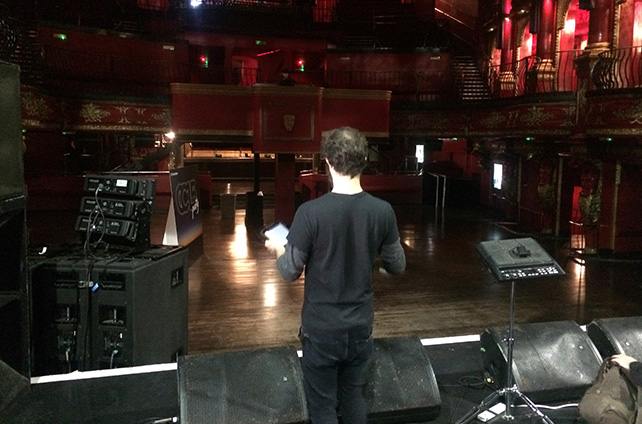 The project was initially to create a restaurant and bar space within the existing auditorium roof extension. This then developed into rebuilding the Hope and Anchor pub at the rear of the venue and replacing the offices that adjoined the site with a hotel. The client had great ambitions for the project and creating a dynamic cultural hub with the highest quality facilities, all with the goal of safeguarding the venue’s future for another 100 years. The client dreamt of a recording studio, suspended above the stage where the artist playing could record whenever they felt inspired. The hotel and studio concept was quickly dismissed following a site visit with the project acoustician, who during the sound check for a heavy metal band took a bit too much joy in telling us all that this was the loudest music venue in London, and that the space above the stage was probable the worst place in the world to locate a recording studio. After some consideration the client decided not to build a hotel and instead create ’The House of KOKO’, a private members club. 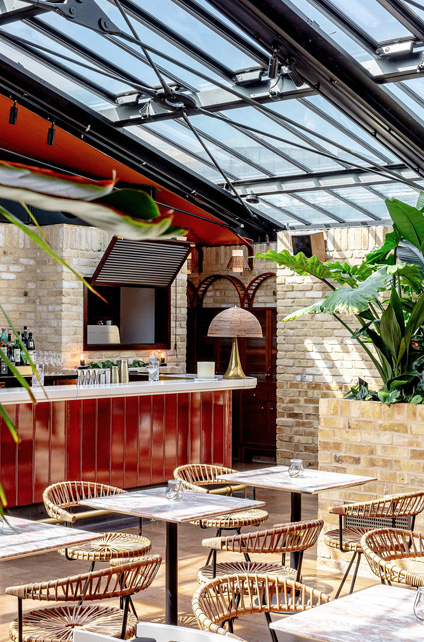 A corner of roof terrace in The House of KOKO. Interiors by Pirajean Lees in collab with Olly Bengough © Taran Wilkhu

We began the project, as we do all our refurbishment and renovation schemes, with a deep dive into the historic archives and research. We found some fascinating information, watercolour drawings from the original architect created in 1903, which were invaluable and confusing in equal measure. They provided us with the location of the, now infilled, orchestra pit, but showed a steel truss and timber roof that were no longer present. And the key interventions taken to turn a theatre into a venue with capacity for 2000 people were not captured on paper. A key source of information at the early stage of the project was John, the caretaker, who had been with the club since its Camden Palace heyday back in the 1970's. John was able to pick through the numerous iterations and changes that had formed part of the building’s evolution which allowed us to build up a full set of existing drawings. 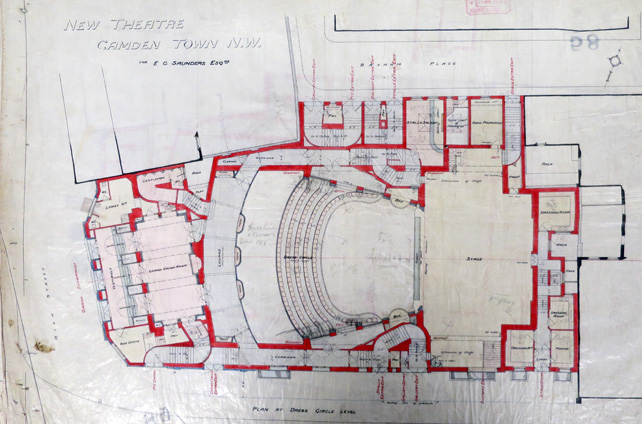 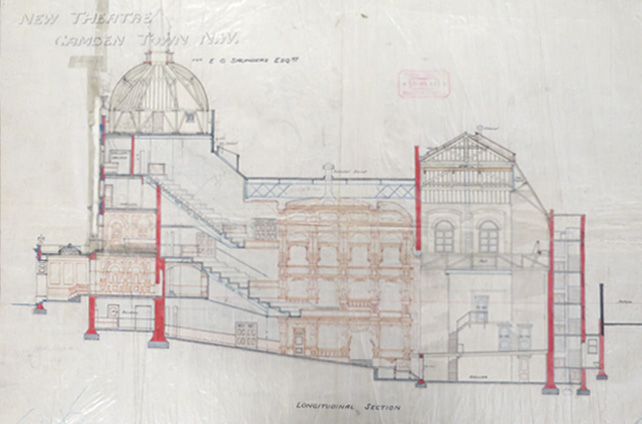 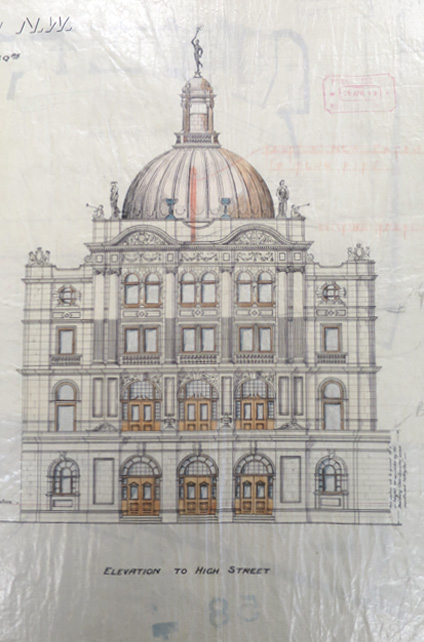 During the early investigation and testing phase we discovered a worrying amount of corrosion in the main steel truss that was supporting the whole front section of the roof and copper clad dome. We told the client that they needed to close the club and install emergency temporary propping. The temporary works to unload the truss and support the copper clad dome was highly challenging - threading temporary props through the historic fabric with the least amount of impact, while ensuring an aligned load path was very difficult. 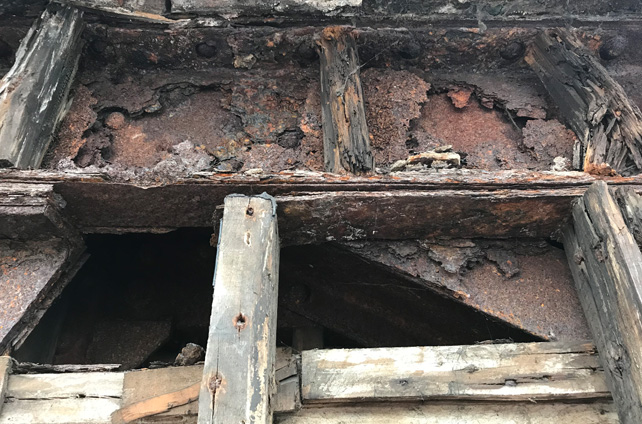 The Hope and Anchor pub and two office buildings to the rear of the venue were incorporated into the design as the members club element. The buildings were in a poor state of repair and could not accommodate the higher loading requirements, so sadly it was not viable to reuse the main structure. The facades to the pub were of local historic importance so could be retained and the new structure constructed behind. 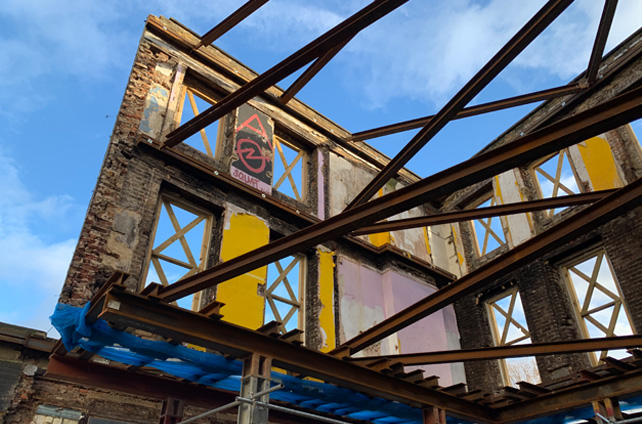 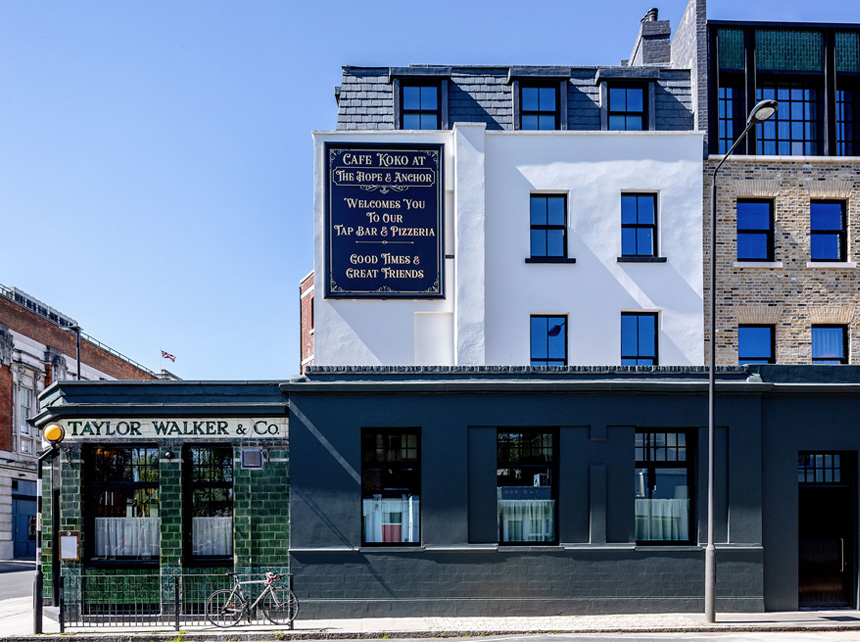 A devastating electrical fire in the dome soon changed that approach. On the evening of 6th January 2020, a fire broke out in the copper clad dome taking 8 fire engines 5 hours to extinguish. The dome was completely destroyed, and the sheer volume of water used to fight the fire caused extensive damage to the listed fabric and finishes inside. Once the building had been released by the London Fire Brigade (LFB), a team from HTS and the main contractor inspected the venue. Whilst the fire had been fairly well contained by the LFB, the water was a meter deep in the basement, the timber dome destroyed with the supporting slab damaged, and all the electrics requiring replacement. 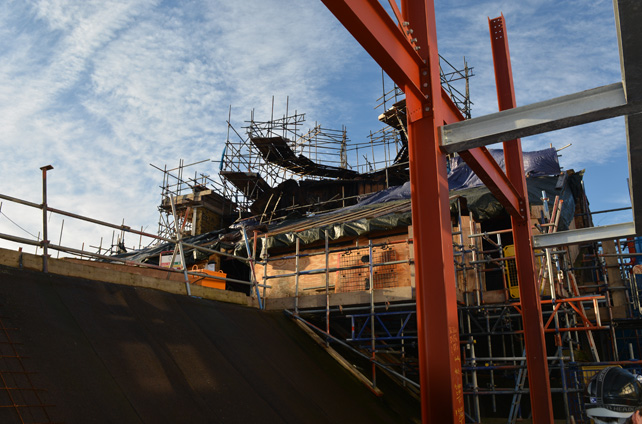 The dome was reconstructed in solid oak rafters, matching the original configuration and clad in new copper sheeting. The damaged dome filler joist slab was demolished and replaced with a new slab and stair void, formed to allow access into the dome space so it could be used a cocktail bar. 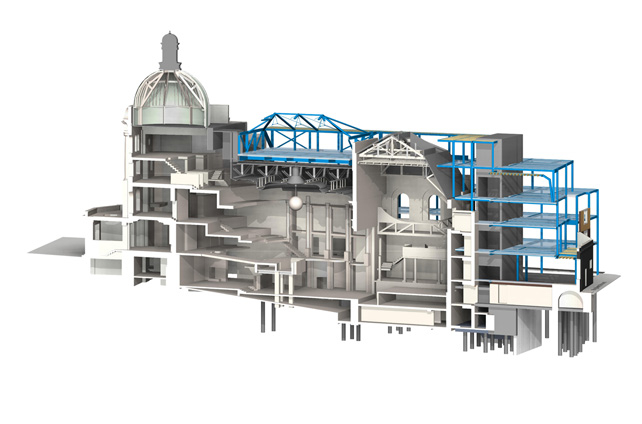 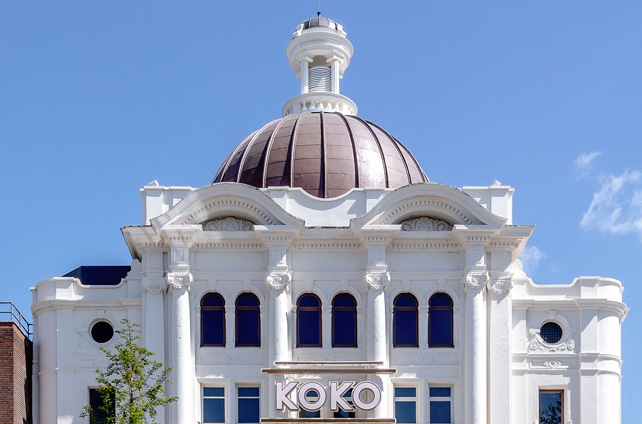 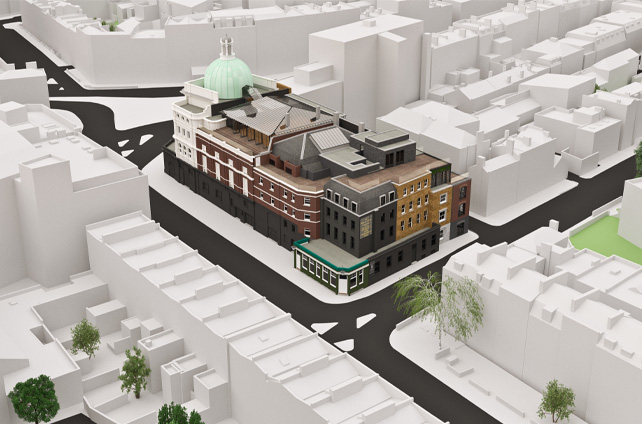 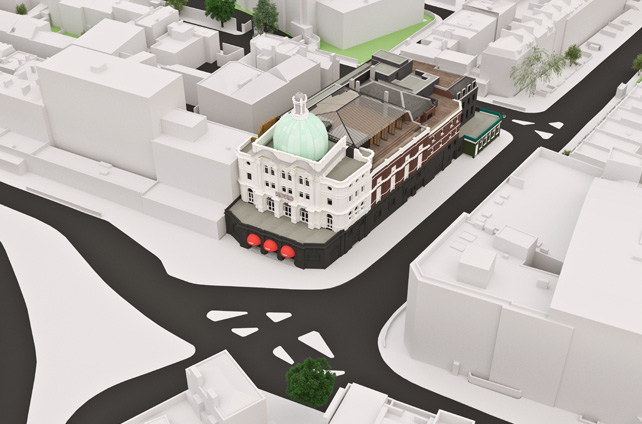 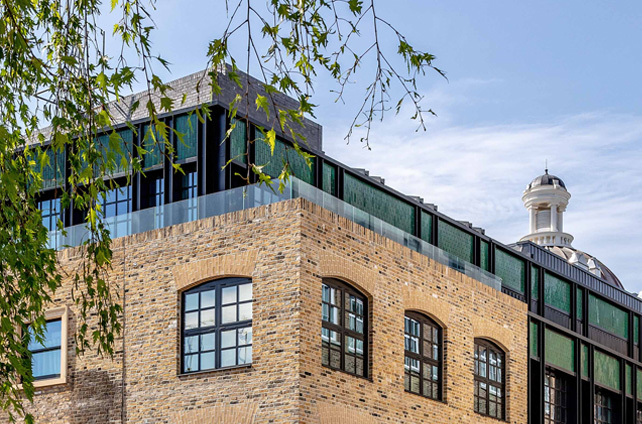 KOKO reopened on 29 April to much acclaim, with Arcade Fire performing the first gig in the venue since it closed in March 2019. The project whilst challenging was hugely rewarding. And personally, it was fantastic to help safeguard the future of an iconic music venue for the next generation of teenagers looking to escape suburbia. 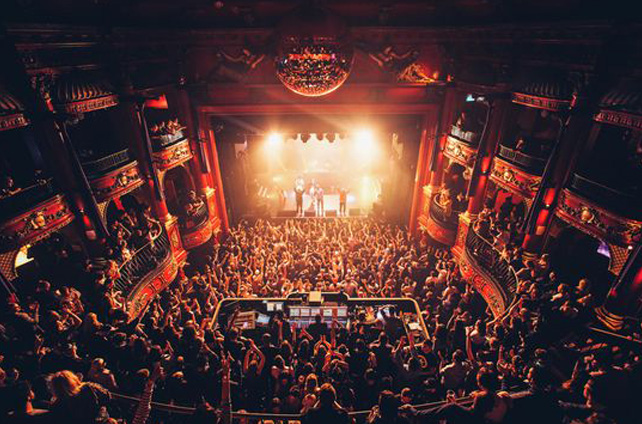