For the second part of our Technician's Focus series, we sat down with Spencer Stevenson who is a Senior Associate at HTS, having joined the practice shortly after it was established 15 years ago. Spencer has over 30 years of experience working on complex schemes ranging from adapting listed residential buildings to £120m prime commercial developments. 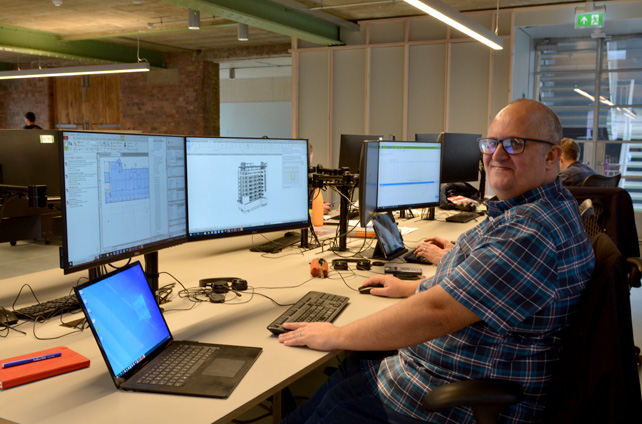 What inspired you to pursue a career as a technician?

I left school without A levels, but with reasonable O levels and went and started a foundation course at Art college. At the time it was an interest rather that a way to get into paid work. Part of the course was to do with computer created design and we used Autocad. I had been interested in computing from a young age and had been creating games and software as a hobby. I took to it like a duck to water. A few months later I saw an ad in the paper advertising apprenticeships for Architectural Assistants, I went along for an interview, and it was decided I wasn’t suited to Architecture but would be welcome to take a shot at Engineering.

When I arrived at my placement, there was a PC with AutoCAD installed, but no-one had used it to any great extent. I started training on the drawings board originally, but as more work arrived in digital format, I became the office CAD user, and that became the focus of my training.

What does a normal day in the life of a technician look like?

My day-to-day role has obviously changed a little as I have been promoted to Associate, but the Associate role as a technician is very different to the role the Associate Engineers have. Whereas they have a focused team of engineers to lead, my role is wider as I (along with Mike Calnan, the other Associate Technician) lead the Technician team across the whole office. There is some management involved in that side, by my main role is still as a hands-on Technician.

I work alongside the Engineers to convert the design and calculations into working drawings that can eventually be used to build from.  In Mark Tillett’s team we undertake many large refurbishment projects and I tend to work on these rather that new-build projects as I feel they are far more challenging to undertake.  I would usually start with a set of survey drawings, along with any archive information available for the project. The Team Coordinators at HTS do a wonderful job at digging through the history of these structures, and we can usually find at least a basic set of archive information to work from.  We build a digital version of the existing structure, using both the archive information and survey, and that is used to inform the design. Once the Architect has decided what the proposals are, we will model these to the Revit file.  As a phased intervention, we can then use this file to produce existing, demolition and proposed drawings sets.

What key skills have you learnt at HTS so far?

I started working with Andy, Tom and Mark at Price and Myers, when we were all a lot younger than we are now. At that stage I had a lot of experience using Autocad, and was using that to build 3D models, but using 3D in AutoCAD was limiting in producing drawings from those models. A few years before HTS started up, we started using Revit as our primary 3D modelling package. By the time the three Directors left to start HTS, I had a few years of Revit use behind me, but had undertaken a lot of study in using and developing the software. When I joined the company, a few months after launch, we decided we would try and get to a point where Revit was used for all projects that required Technician input.  Since I have been at HTS, I have expanded my knowledge in using the software greatly and we have developed procedures to extract C02 data from models.  For instance, I have created a set of complex families to allow the Civils team to model and schedule underground drainage. I feel that at HTS my knowledge on many Autodesk products has expanded and a lot of this driven by BIM. It’s hard to quantify how much I have learned about building and structures since being here. The lunchtime presentations and training sessions we have each week means something can be learned every day and I view structural knowledge as an ongoing learning curve.

What software do you use?

We use Autocad products as our main design tools, as a technician Revit is what I use daily, for modelling and creating drawings, but we also have add-ons like Enscape that we use for visualisation.

Animations are created using Simlabs. We take objects from our Revit models and import them into Simlabs. This allows us to create animated movies of construction sequences.

What projects are you working on currently – how has Revit improved your efficiency?

I am working across various projects across the team. As the senior team member, I drop in and out of projects as they need a Senior Technician to help with issues including complex modelling and family creation. Revit improves efficiency greatly in my opinion, due to the live model to drawing link that is native to the workflow. This means that design changes can be quickly incorporated across multiple drawings ensuring coordination between drawing sheets is maintained as the revisions are made.

The embedded data within Revit elements allows us to create complex schedules to help with costing and inform design choices. We also use Dynamo, to add automation to Revit. This means we can create our own scripts to do repetitive tasks. An example of this is cutting voids through steel frames - we have a set of families that we place in the model that we can label and schedule, which means the voids are live objects. Natively, we would then cut the voids into the beams, and this would mean selecting them one by one, which can be a very repetitive task on a structure with hundreds of voids. We created a Dynamo script that will automatically detect void/beam clashes and cut one from the other. This way, a job that used to take a few hours can now be completed in 2 minutes, and as it done automatically there is no risk of human error or where one or two are missed, which on long repetitive tasks can be an issue.