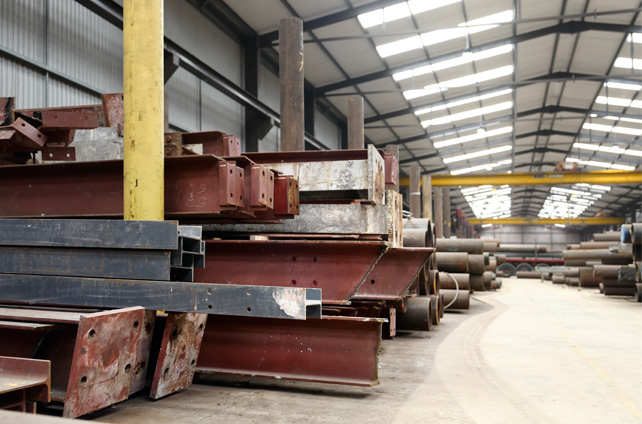 Using reclaimed materials within the construction industry is not new. Taking materials from one redundant structure and reusing them in another has taken place since humans started constructing. So why are we suddenly getting so excited about using reclaimed materials now? The main factor is the environmental crisis. The UK Government’s recent climate change legislation and the ambitious carbon targets from funders and end users, are encouraging developers and their design teams to look at exactly where carbon is contained within construction projects and where it can be reduced. Coupled with this is a need to move away from the current “throwaway” culture, where it is often cheaper and easier to disregard or “recycle” an item rather than reuse it in its current form.

Steel within the construction industry is already a heavily recycled product. In the UK, the recycled content of steel is typically 20% scrap and, on the continent, where electric arc furnaces are utilised, this increases to 95% or more. However, the process of melting the steel scraps and reforming still requires vast amounts of energy, around 1.7kgCO2e/kg as an average figure.

Steel is the perfect material to be reclaimed and used repeatedly when kept in its current form. It is strong, robust, stable and if kept in the right conditions (a warm, dry environment), has an incredibly long lifespan.

Once extracted, the process for reusing is straightforward. The steel is: 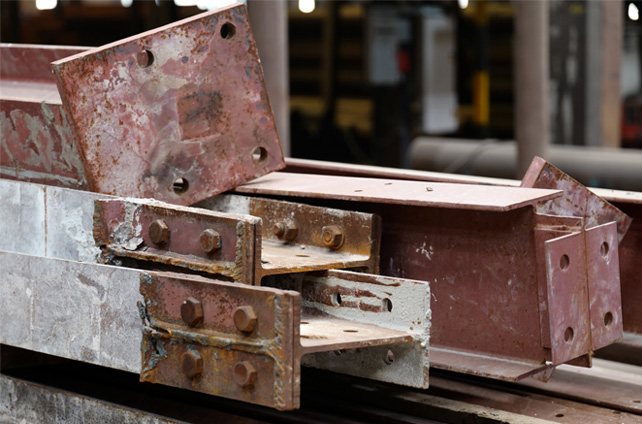 If the existing steel can be reused in its current form, be it a beam, column, truss, without the need for melting it down, then the carbon emissions are drastically reduced when compared to a newly formed piece of steel. Recent industry figures suggest this value is as low as 0.047kgCO2e/kg, when accounting for the deconstruction, transportation, and de-fabrication of the steel.

The fabrication of new connections, coatings and transportation (module A4-A5) has a proportionally large impact and we have seen the embodied carbon values raised to between 0.15kgCO2e/kg and 0.48kgCO2e/kg for reused sections, where new connection plates are used. Whilst this shows the importance of accounting for these emissions, it also highlights an area where these figures can be improved, by using reused steel plate, potentially extracted from existing offcut sections.
The use of reclaimed steel on a large scale is still in its infancy and it needs the industry to work together further to start the process before it can become economic to use reclaimed steel more widely and for the real carbon benefits to be realised. 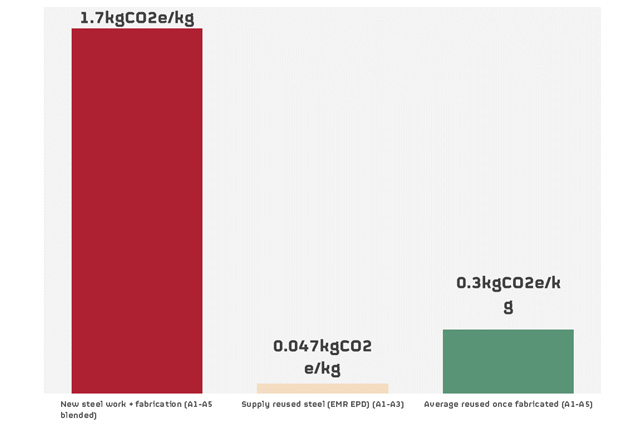 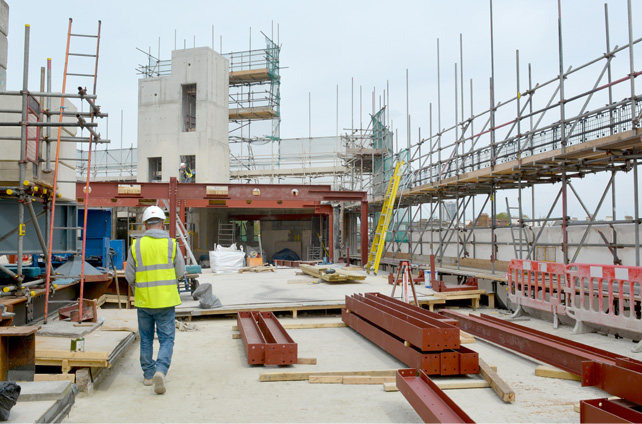 With a large building stock, Grosvenor Property UK wanted to find ways to use reclaimed steel in their projects and the sustainability led project at Holbein Gardens was the perfect fit.

Holbein Gardens is a refurbishment of an existing 1980s commercial building to create a modern office with additional floor area. Sustainability is at the heart of the development, reusing as much of the existing building fabric and providing a low carbon extension, incorporating engineered timber slabs and a reused steel frame. Heyne Tillett Steel, as the project Structural Engineers, have helped to drive forward the reuse of steel and overcome several hurdles, which are summarised below.

Steelwork was identified at another Grosvenor project in Bermondsey, where the demolition of a large steel framed building was to take place. Much of the steelwork comprised of pre-1970 deep trusses/girders, which were not suitable for the proposed use at Holbein Gardens. The date 1970 is significant in structural steel history, as this was when steel manufacturing became standardised, with older steelwork potentially more variable. Other steels were constrained by concrete encasement or being designed compositely with shear studs welded to the top flange, making demolition more complex.

However, a more recently installed mezzanine area contained suitable length and size steels, which was secured and provided around 9 Tonnes of steel for reuse.
Once Grosvenor’s own stocks had been exhausted and thanks to partnering with Cleveland Steel, who are a specialist steel stockist in reclaimed steel, 16 Tonnes of additional reused steel was secured.

The sizes and strength grade of this steelwork was not an exact match to the original design. The stock available at that point in time was fed into the design and checked for both a structural and architectural impact. This had a slight effect on the amount of design time required. Grosvenor then secured the steel until it was ready for fabrication.

If the reuse of steel is the aspiration for a project, there is a need for some flexibility or loose fit to allow for sizes to change, as specific sizes won’t always be available. As the market for reuse increases, this should increase the quantity and selection of stock steelwork that can be obtained, making steel sections easier to obtain. 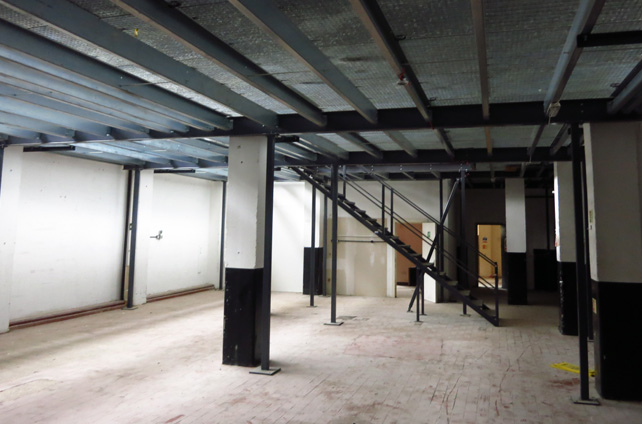 Steel beams were identified at Holbein Gardens that could be salvaged from an existing mansard frame due for demolition. This was fairly limited in scale and with a short timeframe between demolition and erecting the new frame, it was found that the programme was too short to allow the steel to be removed, finishes stripped, tested, cut to length, fabricated and transported back to site. This steel has been salvaged for use on other Grosvenor projects.

The larger sizes where the real carbon savings could be generated were not located or were found beyond the point where the project programme could accommodate. Unless steel sizes are secured early in the design, then the amount of reclaimed steel available is currently limited from stock steel in yards, during the relatively small procurement window. With the number of stocklists currently limited, a balance needs to be struck between obtaining too early, with long storage times or procuring too late and missing out on the right sizes. 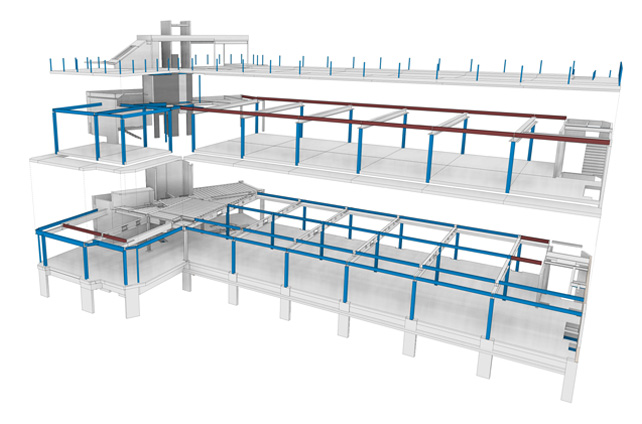 Getting “the builders” on board

While the process of reusing steel is straightforward, it differs from what is currently considered the norm. The next hurdle to overcome was the tendering contractors, who found it difficult to put a cost to the potential uplift of reusing steel and quantify the impact it might have on the construction programme. To reduce the number of interfaces Cleveland Steel were recommended to the tendering contractors to be the main fabricators, as well as the suppliers and testers of the reuse steel. This simplified the process and provided some cost security.

It is likely to take time for all steel fabricators to be comfortable with working with reclaimed members, although increasingly more are showing an interest.
Getting demolition contractors to programme in the extraction of steels and main contractors to understand the procurement challenges is essential for the reclaimed market to expand.

Sampling, testing and confirming steel members are within tolerance is an important step in confirming steels can be reused. This was completed by Cleveland Steel on Holbein Gardens.

To treat the steelwork as a new piece of steel from a quality control perspective, the reclaimed steelwork needs to be CE/UKCA marked. This can only be provided once the steelwork is fabricated, with a steel stockist not able to CE/UKCA mark existing without it being worked on. Having the same steel stockist and fabricator helped streamline this on Holbein Gardens but is more of a hurdle on other projects. 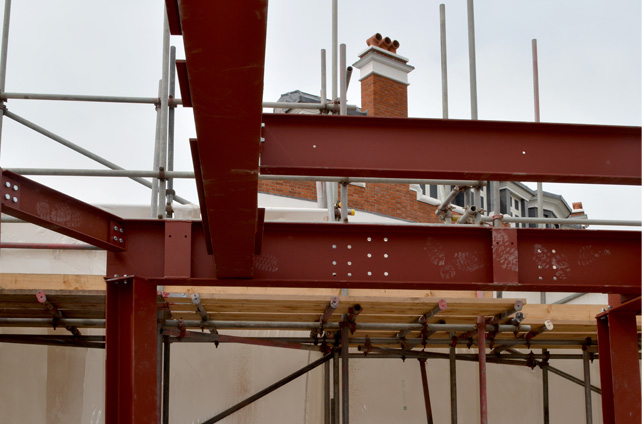 Reclaimed steel in its purest form will not look like new steel. Steel plates, holes and other imperfections from previous uses, that don’t affect the steel performance, will remain on the steel and will need to be considered where steel might be exposed. On Holbein Gardens much of the steel is hidden but Grosvenor were keen to show these imperfections where possible, to tell the reuse story.

The steels reused on Holbein Gardens were taken from low load applications, roofs or temporary works and so only steel primer needed to be removed. Concrete encasement, intumescent/vermiculite fire protection, shear studs etc. would all need to be considered where found on existing steelwork and fed into the extraction programme and cost.

As part of a further study, working with Grosvenor and with funding from Innovate UK, HTS are undertaking research to look at the re-use of pre-1970 steel and how concrete encasement removal may affect how steelwork can be reused. Results of this will be used to inform future work and it is expected to be concluded in March 2023.

Holbein Gardens is set to have just over 35% of the new steel from reused sources and demonstrates how the challenges of using reclaimed steelwork can be overcome. With more and more interest and understanding of steel reuse, it will become easier to work around and will surely only lead to this becoming more economic, efficient and mainstream way to reduce carbon in the construction industry.