The Grade II* listed Battersea Arts Centre has undergone a rolling series of refurbishments over the past 10 years, with HTS and Haworth Tompkins collaborating since 2012 on the redevelopment and extension of the building, most notably the rebuild of the Grand Hall after the fire.

When the fire broke out in March 2015, HTS attended the site while the building was still ablaze and assisted the fire fighters with assessing the structural integrity of the gable walls. The roof structure over the main performance space was destroyed, collapsing in on itself and dragging in the tops of the supporting buttresses, severely damaging the supporting masonry walls. While an initial loss to the site’s architectural heritage, the fire provided a unique opportunity to design a functional and flexible structure in keeping with the character of the listed building. 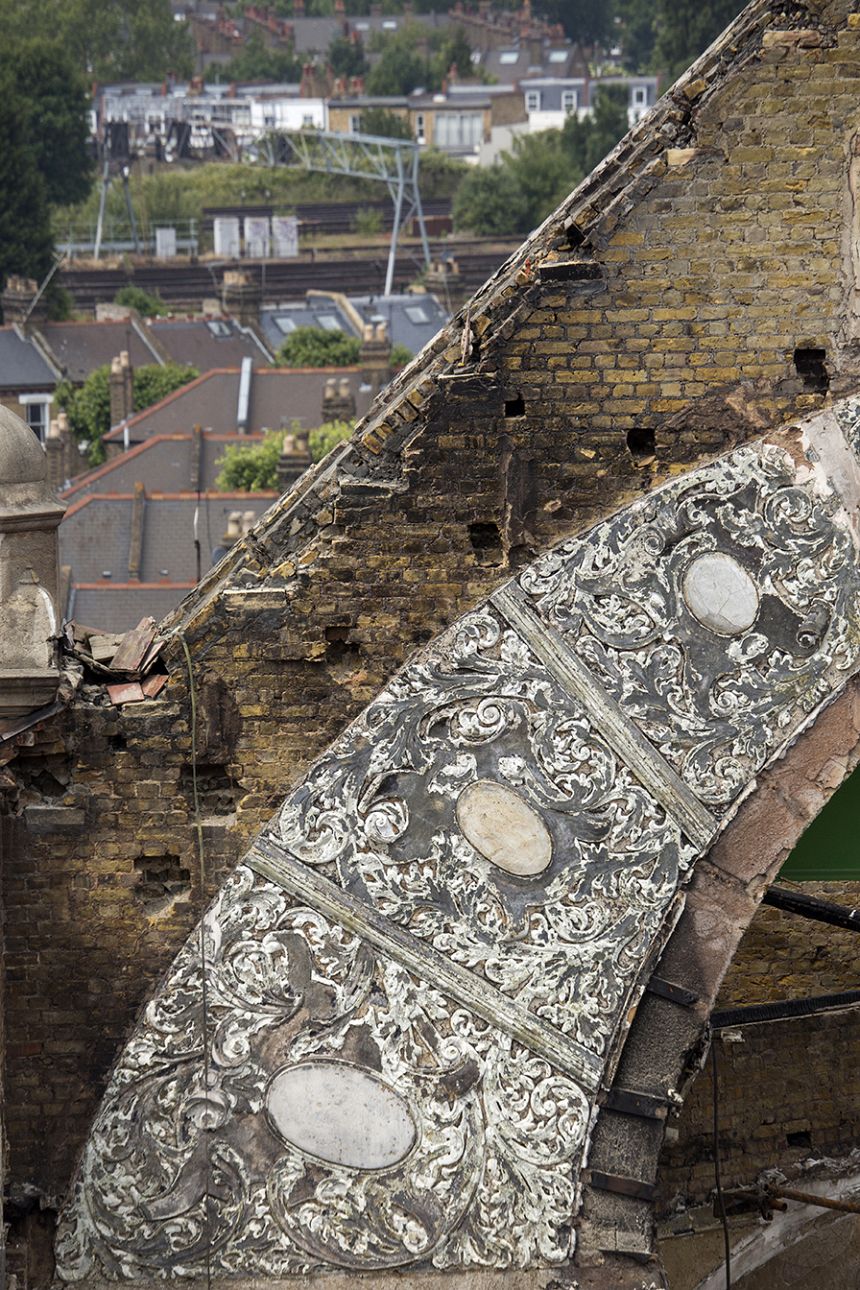 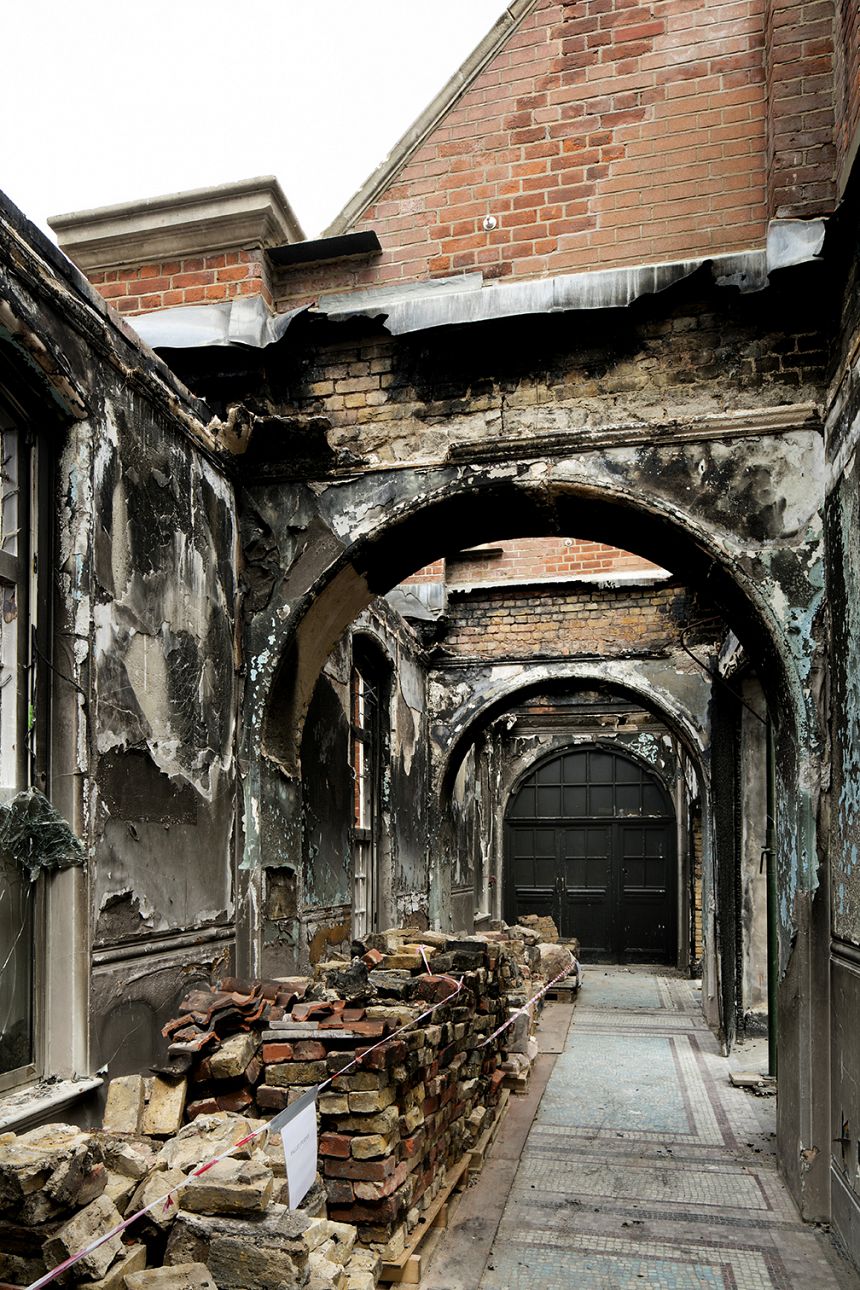 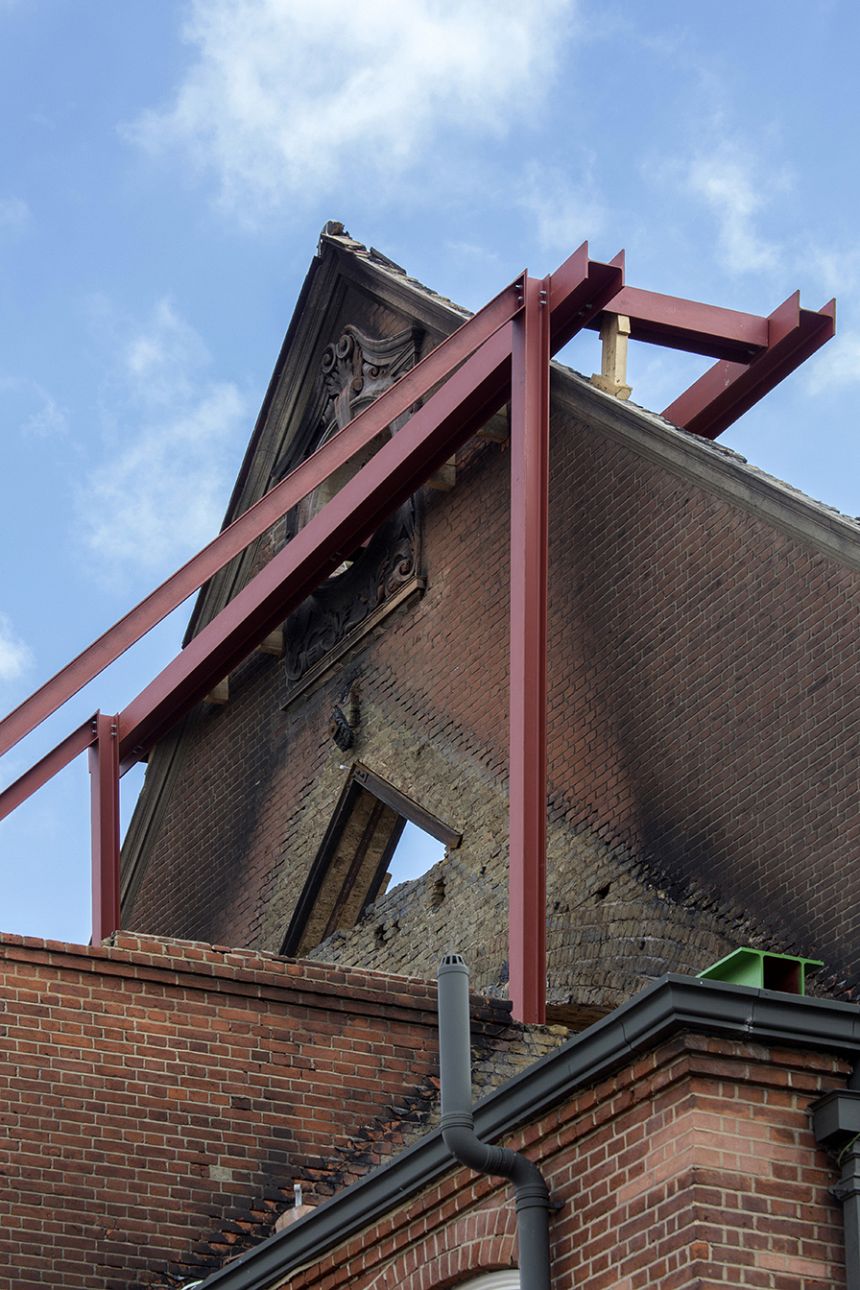 Early interventions were key to the retention of much of the listed building fabric and design features. The large brickwork gable walls were now freestanding and would not survive in high winds. We designed temporary steel frames clamping the walls in place to laterally restrain them. Brickwork testing and local repairs enabled the remaining structure to be safely retained. Extensive propping was installed in the basement to provide support to the Grand Hall slab which was carrying large amounts of debris from the roof.

As the largest of the building’s performance halls, a number of upgrades were designed for the Grand Hall to create a highly functional and contemporary theatre space. Two demountable side galleries were built using slender steel beams hidden within the new acoustic floor build up, the balcony was modified to support an organ and new dressing rooms were installed to the side of the stage. At the heart of the redevelopment, a new adaptable roof was designed to provide a host of technical improvements such as support for a flexible rigging system, lighting and theatre equipment, attenuators for ventilation and a new walkway and back of house requirements, all contained within the original envelope of the of the roof void. 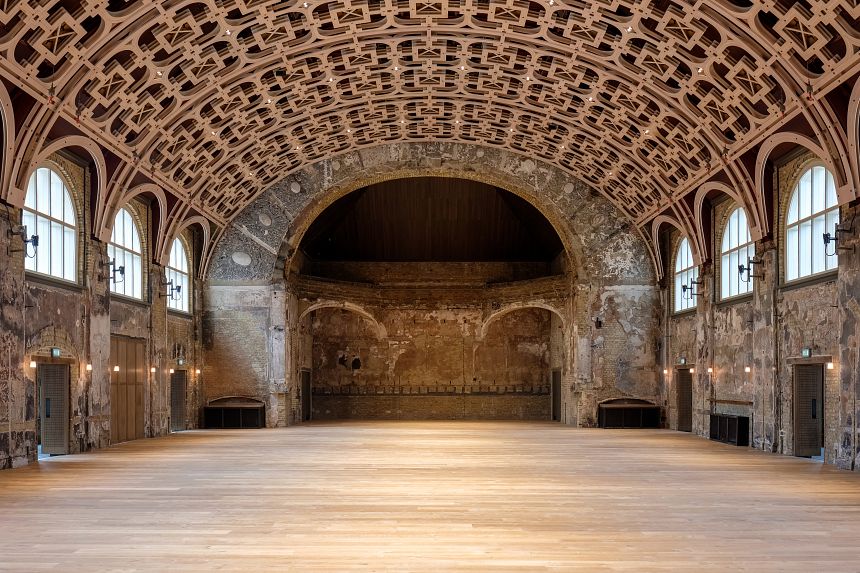 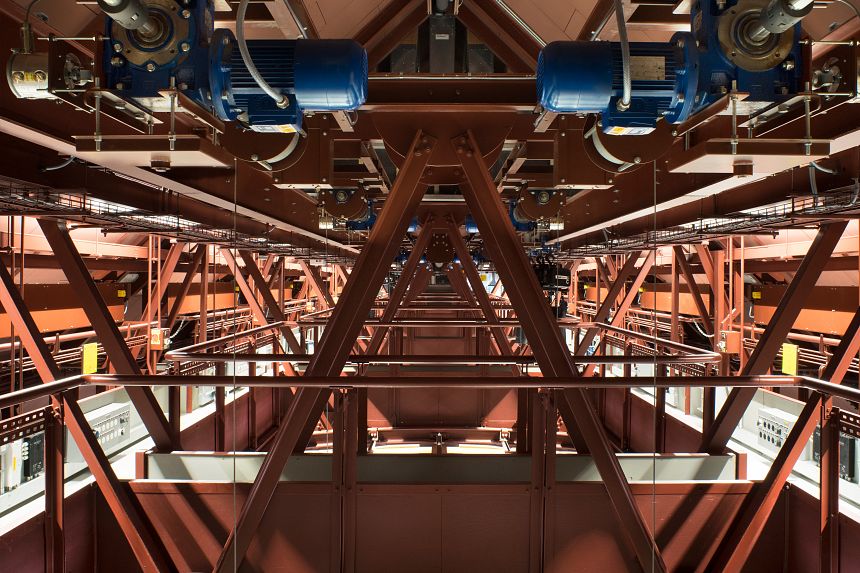 The new structure consisted of six new steel trusses spanning 17.5 m onto the original buttresses. Rebuilding the roof posed a number of structural challenges, including the increased loading requirements, the reduced depth due to the new acoustic and thermal insulation and the reuse of the original masonry buttresses.

The original trusses had curved lower chords and plated haunches which were built into brickwork buttresses. These are two storeys high and incorporate brickwork arches over the hall’s side corridors. During design development it was established that the thrust imposed from the new roof, which pushed out onto the buttress, could not be justified for modern codes. To overcome this, elastomeric bearing pads, typically used on bridges, allowed one of the truss supports to slide sideways. This movement was monitored during construction as the roof build up was constructed and locked in place once 50% of the load was installed. Any further thrust from the remaining roof build up and imposed load could then be justified, avoiding the need to strengthen the original buttresses and allowing the original fabric to be retained.

To complete the new performance space, a lightweight ply timber lattice ceiling was hung from the underside of the truss on a slender steel grid, allowing glimpses of the new truss and technical gallery from below. 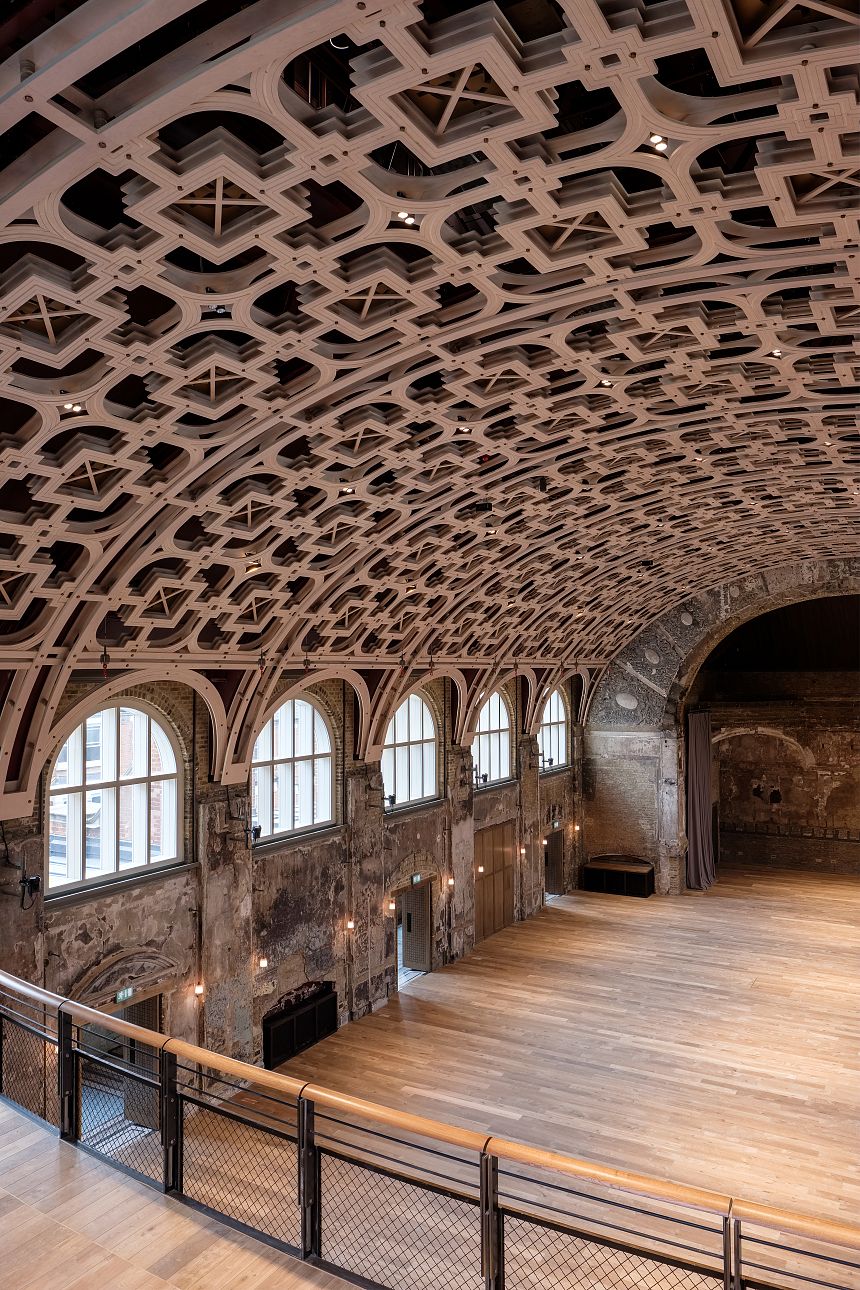 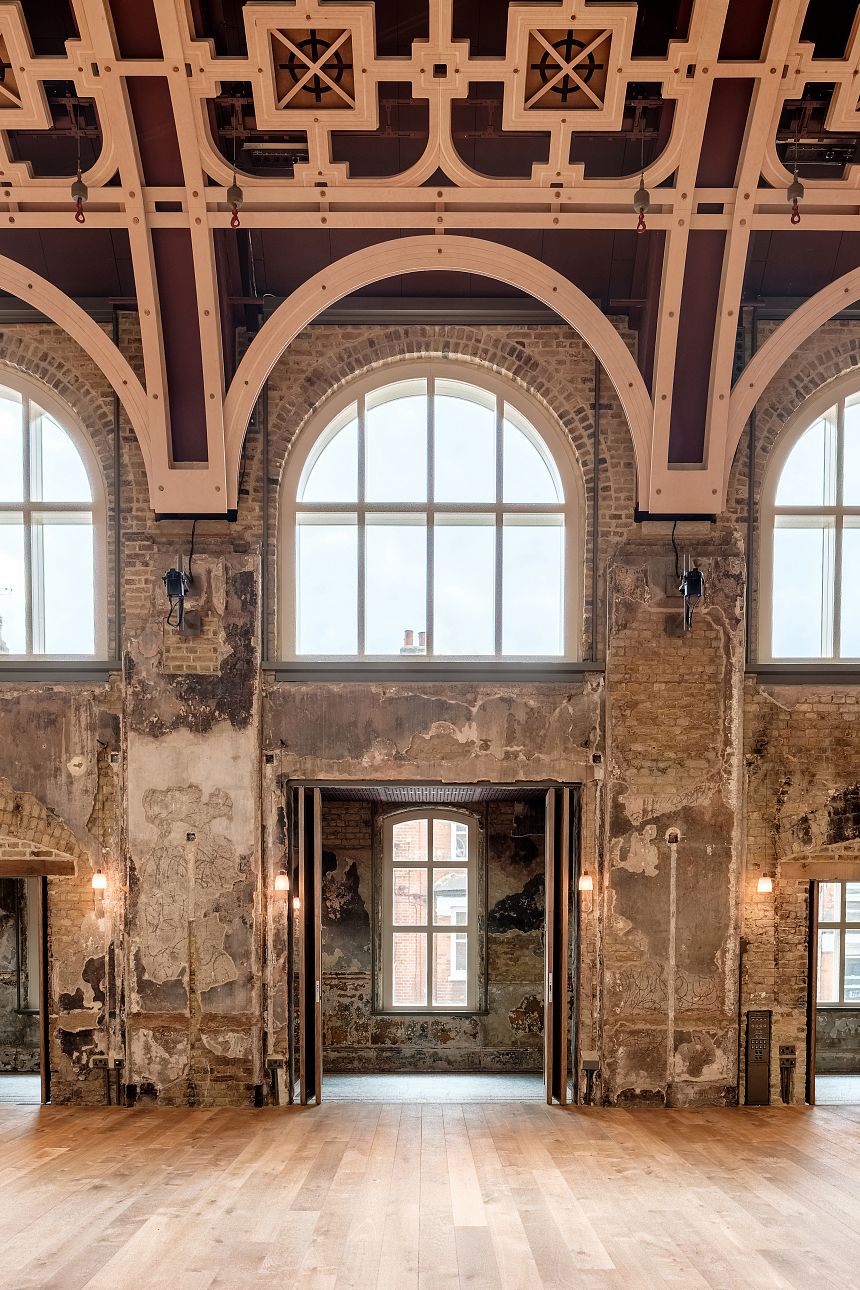 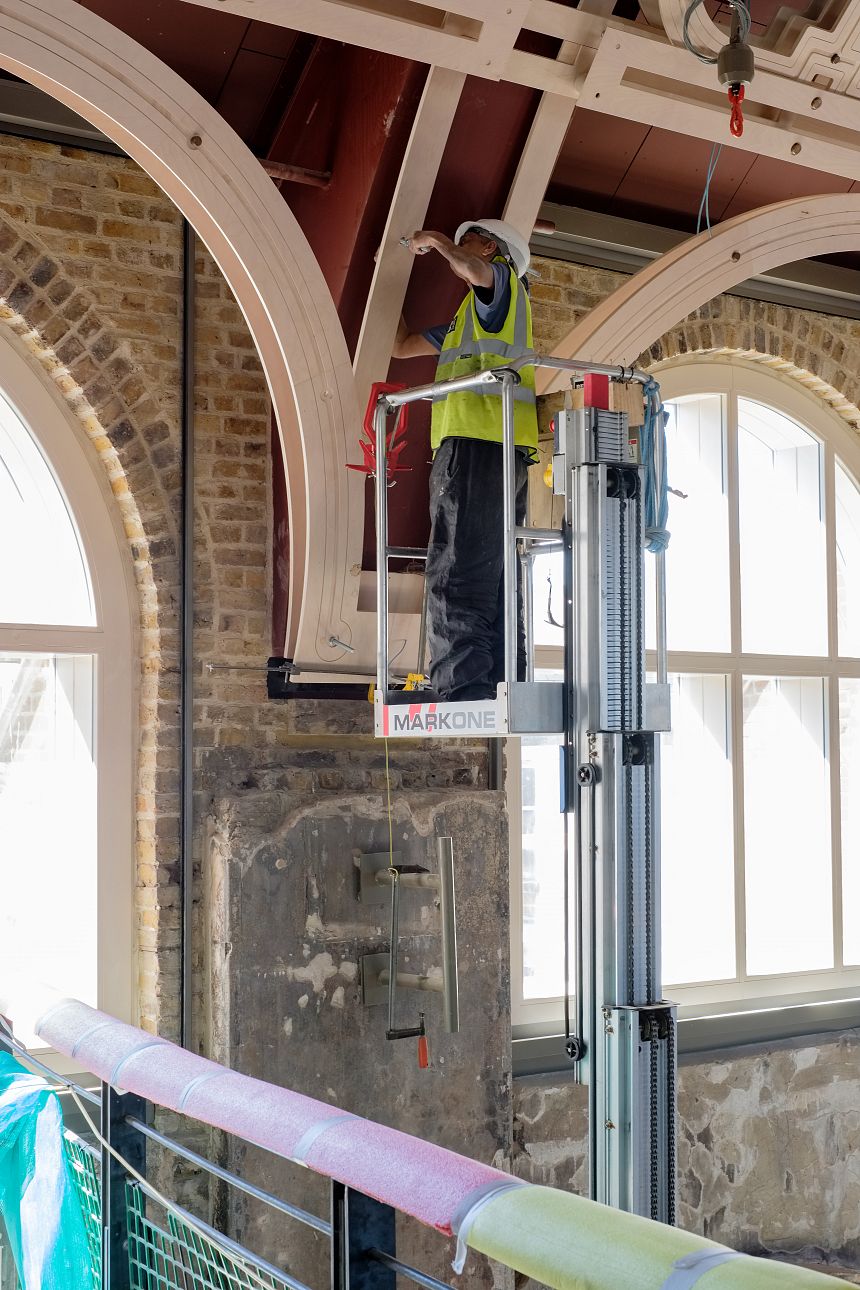 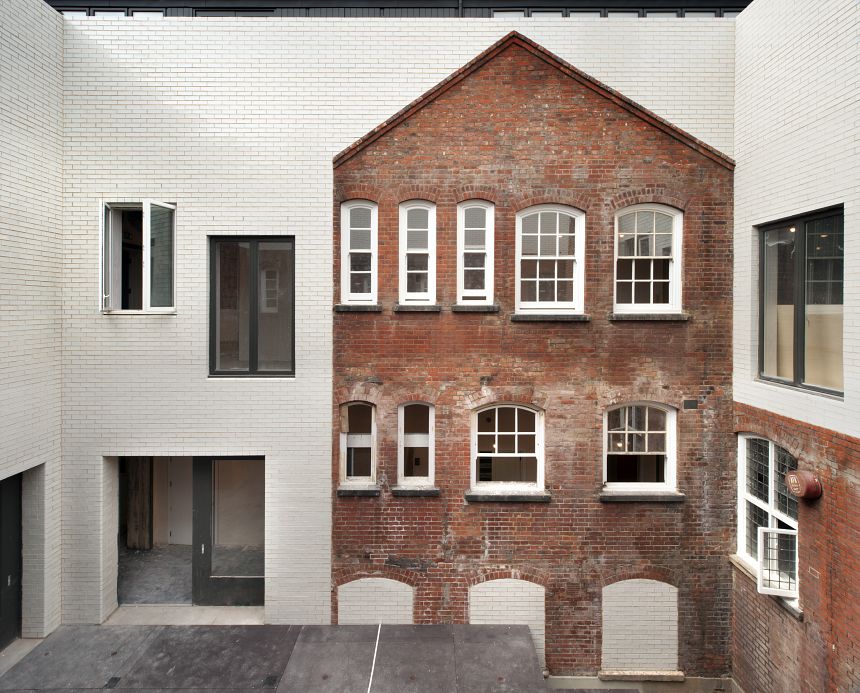 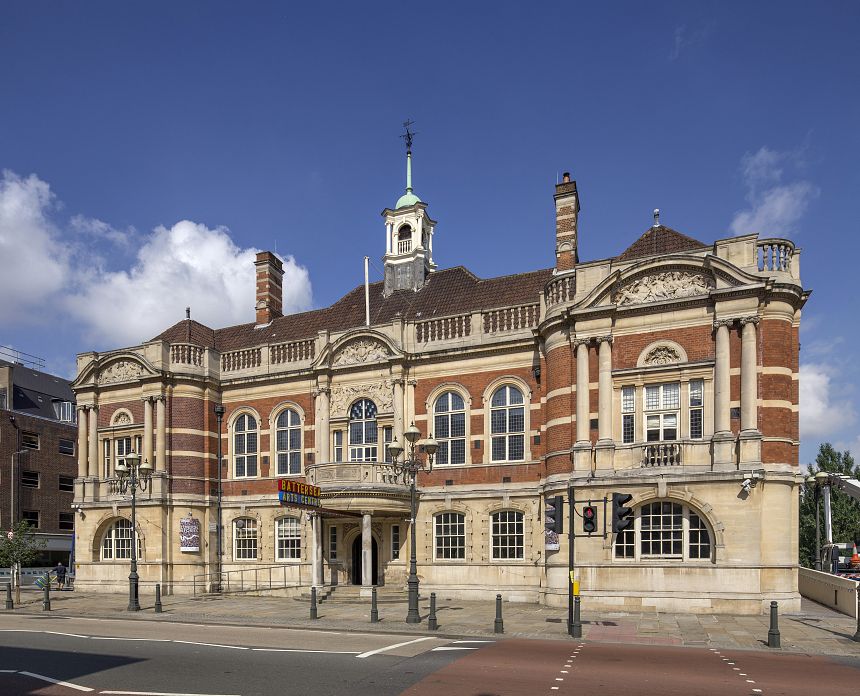