In the short to medium term the substitution of cement with ground granulated blast furnace slag (GGBS), a by-product of the steel industry, can reduce the embodied carbon of concrete mixes. Understanding the steel manufacturing process can provide an insight into the long-term availability of GGBS. 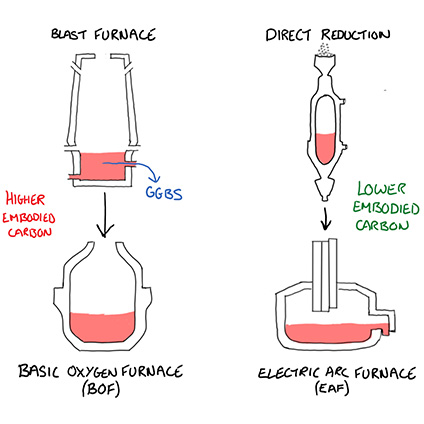 There is no specific data on slag production, but the global quantity of GGBS can be estimated from crude steel production. Approximately 300kg of slag is produced for every tonne of iron, which is converted into granulated blast furnace slag (GBS) with 90% efficiency. Steel is roughly 97% iron and accounting for a small proportion of scrap steel, it can be calculated that 243kg of GBS is produced for every tonne of steel. After being transported to the country where it will be used, the GBS is typically mixed with a couple of other sources of GBS before being ground into GGBS so to ensure that it is of the correct quality to meet regulatory standards. 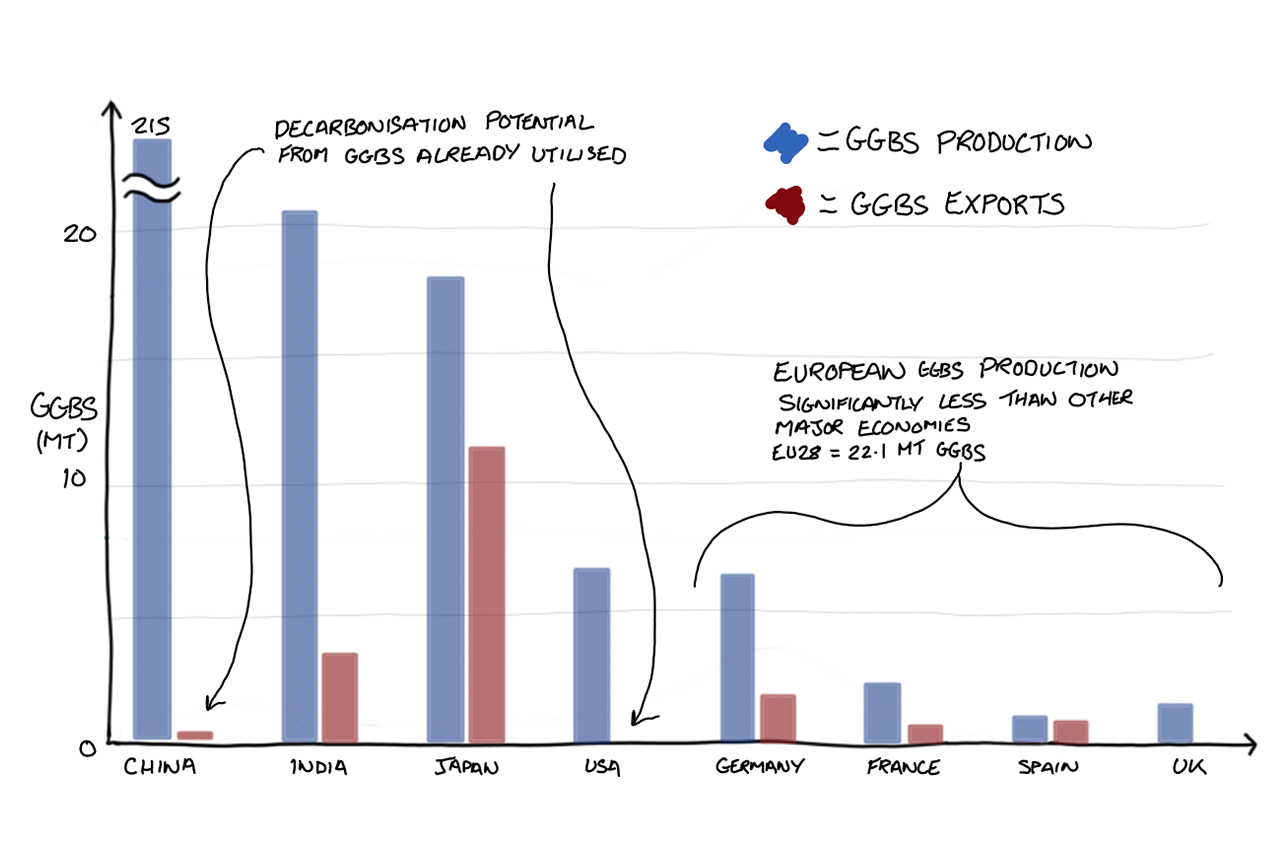 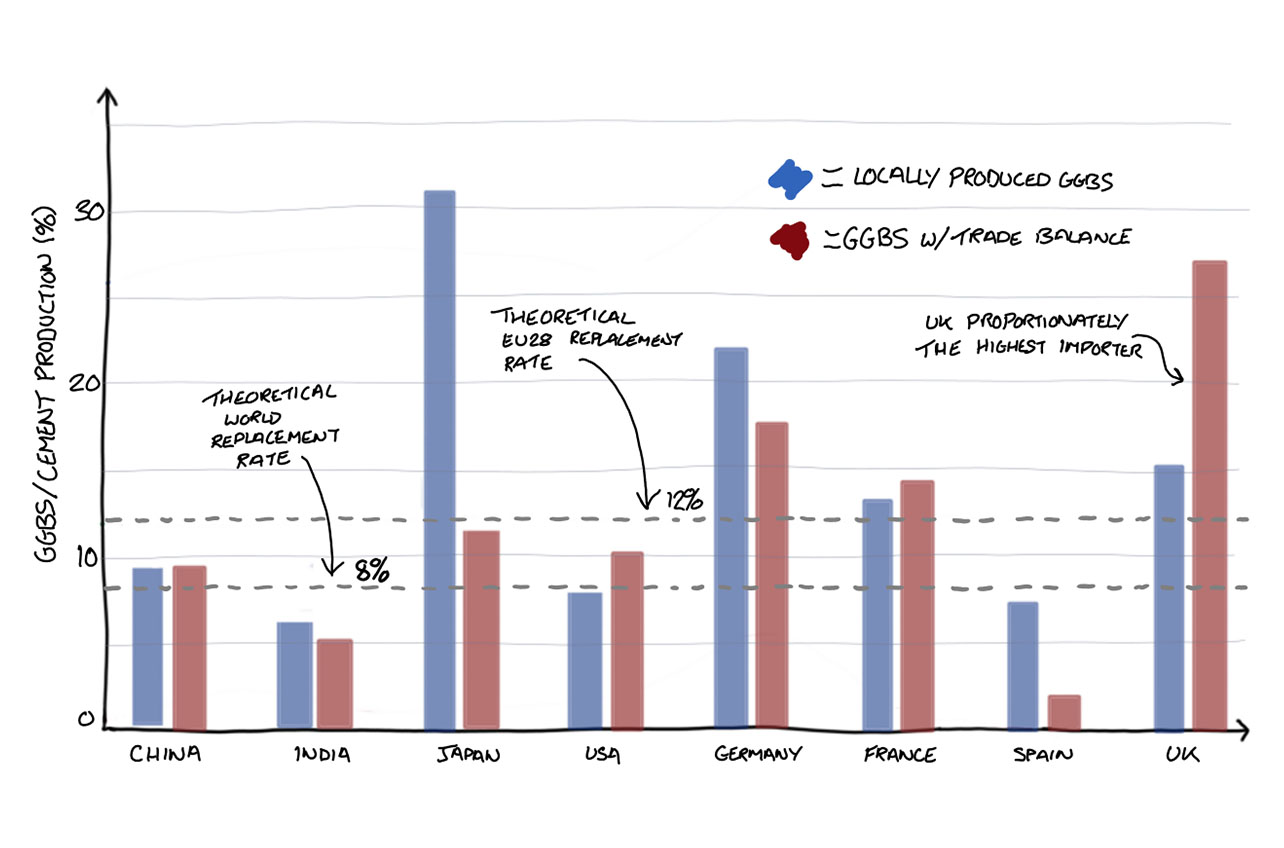 Using steel production data and import and export data of GGBS the relationship between locally produced and imported GGBS can be found along with global movements of the material as shown in figures 2 and 3.

As the steel industry decarbonises the share of production from EAFs will rise, currently the global split is about two-thirds BOF to one-third EAF.

Steel producers in Japan, the largest exporter of GGBS, have already invested in multiple EAF plants since the start of the decade as it looks to decarbonise its steel industry. Whilst the production of GGBS can be estimated and forecasted globally from steel production, the local demand for GGBS is harder to predict as countries aim to decarbonise their concrete industry. UK and global GGBS exports from 2012 to 2019 have been shown in figures 4 and 5 below.  It is expected that local usage will increase and quantities available for export to fall. This behaviour change could affect the availability of GGBS drastically, especially in countries where domestic production is already limited.

Given the realities of GGBS supply and demand, what future innovations and alternatives can we look towards?

Using less is always the most effective method for reducing embodied carbon. In the remaining material, we can be clever about the choices we make to help make further embodied carbon gains. Concrete mixes are typically specified with a target cement replacement content to achieve the desired embodied carbon reduction. This can limit the flexibility of both the supplier and contractor to achieve the most optimal mix design, as early age strength can often dictate the mix design. Part 1 of this series spoke about the technical strategies we can employ to resolve these difficulties. Specifying concrete to an embodied carbon target, as outlined in the ICE Low Carbon Concrete Routemap, can provide the supplier with the flexibility to achieve the most optimal concrete mix whilst responding to market supply.
The revision of BS 8500, due to be published in 2022, will allow for multi-component cements. Limestone, a widely abundant and local material, can be ground down into fines and incorporated into the cement, releasing pressure on GGBS. Research carried out for this update showed that there is good synergy between GGBS concrete mixes and the incorporation of 10% limestone fines. Limestone has a similar embodied carbon to GGBS, so whilst a concrete mix will not necessarily have a lower embodied carbon the supply of GGBS will go further, delivering an overall carbon reduction.

Alkali activated cementitious material (AACM) and geopolymer concretes are becoming increasingly available on the market that has 0% ordinary Portland cement, providing significant embodied carbon reductions. The products currently available on the market are dependent on GGBS and pulverised fly ash (PFA) so will suffer from the same availability issues as outlined above, but the development of the activator materials will have an important role as new supplementary cementitious materials are introduced.

The concrete industry is aware of the supply issues around GGBS, and there is a significant amount of ongoing research to identify future opportunities. These opportunities in low-carbon concrete can be broadly split into two categories: supplementary cementitious materials and cements made from alternative clinkers. Some of the developments in these areas are discussed below.

Supplementary cementitious materials (SCM) are products that replace a proportion of the traditional cement in concrete. These are typically similar in chemical composition to cement, GGBS is a type of SCM.

Pulverised fly ash (PFA) is a by-product of the coal-burning industry and is a widely established SCM. In countries where coal doesn’t make up a significant proportion of the electrical generation availability is restricted. When coal-burning was more common, PFA was landfilled due to the substantial oversupply. Research carried out by the University of Dundee has assessed the suitability of reclaiming this discarded PFA. The report concluded that high replacement levels are likely to be suitable for low performance applications but even at low replacement rates the recovered PFA may prove unsuitable for high performance applications. It is Estimated that up to 50 million tonnes of PFA could be reclaimed but currently the environmental and economic case is still being developed due to the sensitive location of some of the landfill sites and process energy and cost involved in recovering PFA.

Clays with a high kaolinite content can be heated at temperatures of around 700˚C to produce reactive materials that are then used as an SCM. Cement clinker is produced at temperatures of 1450˚C so there are embodied carbon gains from this energy reduction. Clay is one of the most abundant natural materials in the world, which makes it suitable as a long term SCM. Research is currently being carried out to assess the suitability of clays within the UK but is seen as one of the most promising developments for low carbon concrete.

In the production of ordinary Portland cement calcium carbonate is heated to produce calcium oxide, with carbon dioxide as a waste product. Clinkers produced with different raw materials are known as alternative cement clinkers and replace the OPC as the main reactive binder in concrete.

Carbonatable calcium silicate cement cures by reaction with carbon dioxide instead of water. As atmospheric carbonation is very slow, this process needs to be carried out in a curing chamber supplied with carbon dioxide but can reach design strength in 24 hours. Carbonation occurs inwards from the outside, so elements need to be thin enough to ensure they completely harden. The pH of these concretes is too low to provide inherent protection to steel reinforcement. Due to these constraints, the technology is most suitable for precast applications (cladding, blocks, etc.) that utilise non-ferrous reinforcement if required but can provide embodied carbon reductions by replacing carbon intensive products and provide a use for waste carbon dioxide.

Cements based on magnesium oxides (MgO) that harden through carbonation have been proposed as a future alternative to ordinary Portland cement. It has been prosed that the magnesium silicates, found in abundant ultramafic rocks, can be used as the raw material for these cements and in theory be carbon negative as the magnesium carbonates are formed. More research is required to develop the methods and understanding of these cements before they may come to market.

Reducing the embodied carbon of concrete mixes will not on its own address the fact that this is a material made of virgin materials. While they are abundant, this practice is still part of the linear economy and cannot continue forever on a planet with finite resources. The low-carbon strategy should go hand in hand with a push towards circularity in concrete, where materials and elements are retained and reused rather than made new and downcycled.
The monolithic nature of concrete creates complexity in how to repurpose the material in its most valuable form at the end of its life. Whilst the first point of call should be to reuse a concrete structure in its current form, it is not always possible. In these instances, the concrete is most likely crushed and used as engineered fill, downcycling the material limiting its future potential. EPFL, a research institute in Switzerland, cut concrete blocks out of a building being refurbished and post-tensioned these blocks together to form an arch bridge. As perspectives shift from “new” to” repurposing”, in what other applications could we reuse concrete in its first cast form, perhaps as internal partitions, or façade panels?

It is also possible to apply the circularity strategy at a component level. Innovative grinding and grading technology in the Netherlands has created a process to extract the raw materials from concrete: aggregate, sand, and cement. It was found that up to 50% of the cement remains unhydrated and is viable to be reused, in a new mix. The aggregate and sand can be repurposed into new concrete reducing the demand for virgin materials.

The alignment of concrete to direct reuse is not as clear as other primary structural materials such as timber and steel. However, it will continue to play an important role in the built environment as it has major advantages in durability, which is key to building adaptable and long-lived buildings. And as perspectives shift and prototypes are tested, we will start to see concrete as an engineered stone that can be repurposed at the end of its first life, rather than crushed to rubble.

Concrete is a bespoke material that allows for changes in composition to suit the design requirements. Current practice uses GGBS widely to displace the carbon-intensive Portland cement in concrete mixes, but due to supply and demand patterns, this will not be viable in the long term. Material research and innovation are both targeting reductions in the embodied carbon of concrete in new ways. Concrete will continually be changing with these developments: engineers, architects and suppliers will need to continually adapt to enable these low carbon concrete developments and be sensitive to material availability. And as the uptake of circularity principles increases, concrete will be diverted to where it is most useful (durable elements with a long design life) alongside an increase in creative reused and upcycled examples.