Can a concrete frame be low carbon?

Sustainability has always been integral to HTS and we are continually working to optimise our designs and chose the right structural materials for each project.  When concrete is specified, we know that it can have a higher carbon cost than using alternative materials, but that it is chosen because of its low cost, durability and strength. However, there are ways to reduce the carbon intensity of concrete buildings whilst maintaining the benefits that frequently make it the preferred material of many developers.

Using the HTS + Carbon Counter, our bespoke in-house tool, we have calculated and compared the embodied carbon levels of three of our new-build concrete framed commercial buildings, Union Street, Benjamin Street and Nottingdale Village Phase 3, to highlight the different design decisions that can impact the carbon of a concrete structure. 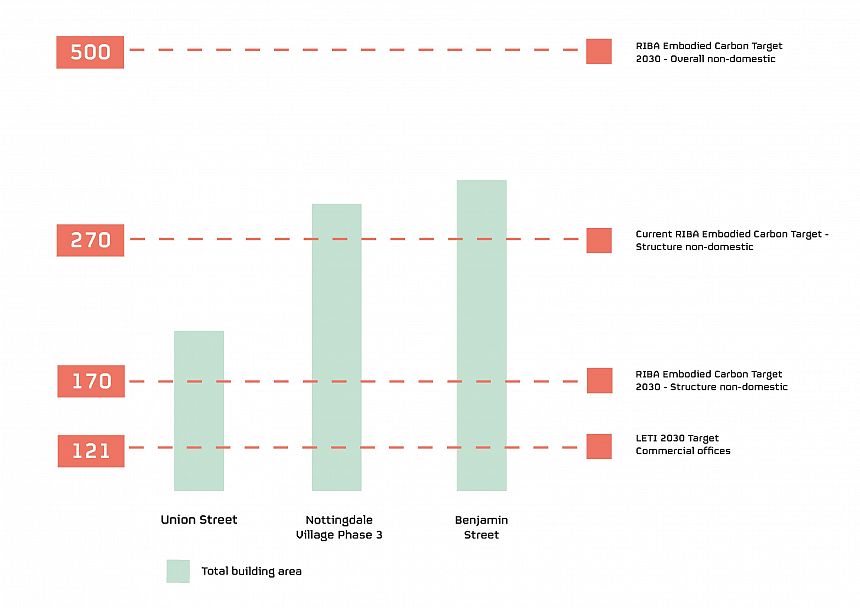 Union Street, designed by architects AHMM has 209kg C02/m2, much lower than the other two projects. This is because unusually, the project was constructed without a basement which has improved its embodied carbon level and provided savings on both material production and programme. By removing the basement, the project has moved much closer to reaching the RIBA 2030 embodied carbon target for a non-domestic structure. Although is some way from achieving the LETI 2030 target for commercial offices.

Embodied carbon levels can also change depending on the size of the structural grid. The larger the grid, the more depth is required for the concrete slabs. This is shown on Benjamin Street and Nottingdale Village where the grid measures 6 x 8-9m, requiring a 325mm thick slab, whereas at Union Street, a smaller grid of 6 x 7.5-9m resulted in slabs of only 250mm thick, reducing the amount of concrete used and therefore improving its environmental performance.

While carbon levels can vary due to a building’s design and end user requirements, specifying high levels of cement replacement such as GGBS can help to significantly improve sustainable outcomes. Different levels of GGBS were used on the concrete frame and piles for the projects, which is directly reflected in their overall embodied carbon levels. Union Street, which used 70% GGBS is much lower than Benjamin Street and Nottingdale Village, both of which used approximately 50% throughout. As a practice we are specifying higher levels of cement replacements such as GGBS on our projects to lower the amount of concrete used across all our buildings.

When considering carbon costs, a challenge across many sector types is whether to design for flexibility. Benjamin Street, measuring the highest of the three projects, was designed for an additional two storeys to be added and subsequently has a thicker concrete transfer deck. While measuring higher for embodied carbon at the outset, the building’s whole life carbon may result in a lower value when redeveloped due to the adaptable structural design. Is it better then, to create higher carbon, flexible buildings which are easier to redevelop and retrofit or design to the bone and reduce carbon costs at the outset? A question we often ask ourselves.

At HTS we champion the idea of continual learning and knowledge sharing. Measuring, publishing and discussing our projects outcomes is one way in which we’re working to achieve the industry-wide goals, RIBA and LETI 2030 targets and create truly net zero carbon structures.