The Grade II * listed Hornsey Town Hall located on Crouch End Broadway has a rich cultural heritage spanning over half a century. But in recent years, the much-loved north London landmark had made its way onto Historic England’s Heritage at Risk list, triggering its subsequent redevelopment. Collaborating with Make Architects for our client Far East Consortium, HTS is undertaking structural and civil engineering services to sensitively restore the building back into public use as a vibrant local arts centre, co-working space and hotel. The wider redevelopment includes re-purposing the Grade II listed Annex building into part-affordable housing, with a restaurant at ground level and the construction of 146 new homes across two new residential blocks, the Mews and Annex buildings.

Constructed in 1935, the building was initially selected from a competition due to its functional and adaptable floor plan. Intended to undergo further expansion, the structure was designed to allow for an increase in office space with the core civic spaces remaining fully operational. With modernism starting to emerge across Britain, local authorities were moving away from traditional Victorian and Edwardian styles, instead favouring simple and functional steel-framed, brick-clad buildings. Once construction was complete, the Town Hall with its iconic tower form, became one the earliest examples of modernist architecture in Britain.

'Working closely with the architect we have developed a design which is highly sympathetic to the listed building fabric; preserving original art deco features where possible and remodelling the existing structure to restore the building and celebrate its unique history.'

The key to the successful adaption of this building, as with lots of our listed building projects, was the discovery of original structural drawings. This allowed us to develop an informed approach and progress the detail design prior to the structural investigations taking place, which, given the extent of listed fabric, could only be undertaken once the main contractor was in place and the period features, where necessary, were temporarily removed to allow for on site investigations. 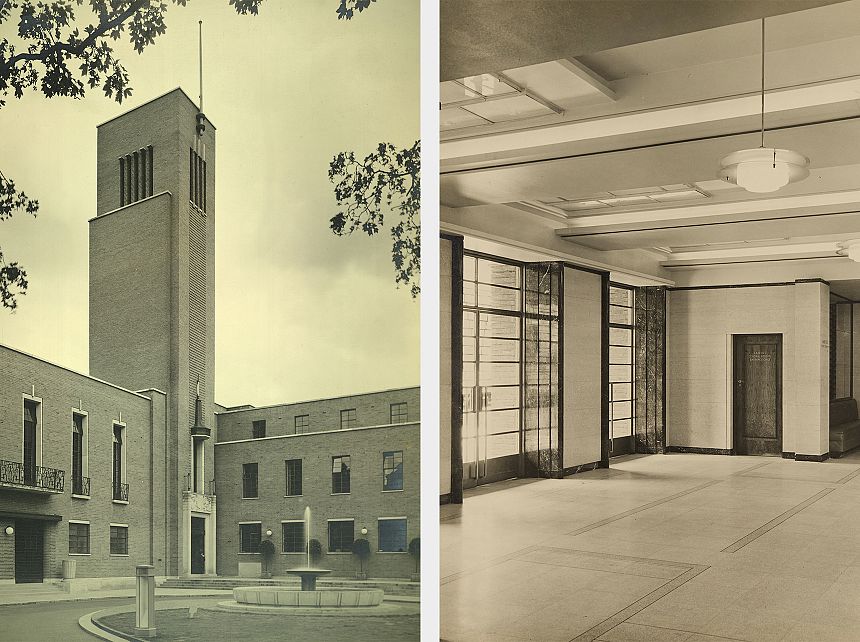 While studying the original drawings we uncovered the design of an additional storey to the eastern wing of the Town Hall building which although always indicated on the drawings, was never realised. The additional floor, currently under construction has effectively increased the area while at the same time re-establishing the original design intent. During early investigations we also rationalised the previous foundation solution, thereby eliminating all piles across the residential blocks.

Once on site, we undertook a number of structural interventions to convert the existing building into a mixed-use development. Part of the former assembly hall, sitting at the heart of the building, has been remodelled into a contemporary two-screen cinema. The original raking steel cantilever balcony which runs the length of the room has been retained and significantly modified to allow accessible lifts to be threaded through it while an acoustic wall was installed to isolate the room within the building. The west wing and assembly hall have undergone structural change to the below-ground floor spaces which have been lowered to address new service requirements. Below the west wing, a new commercial kitchen space has been created and a new plant room has been installed below the dance floor in the assembly hall. This provided additional usable area to the client whilst keeping to the envelope of the building.

The HTS civils team led the complex negotiation of the SuDS strategy with Thames Water and were able to significantly reduce the size of the proposed attenuation tank. The tank was also relocated to the space between the two new-build residential basements to minimise excavation works. 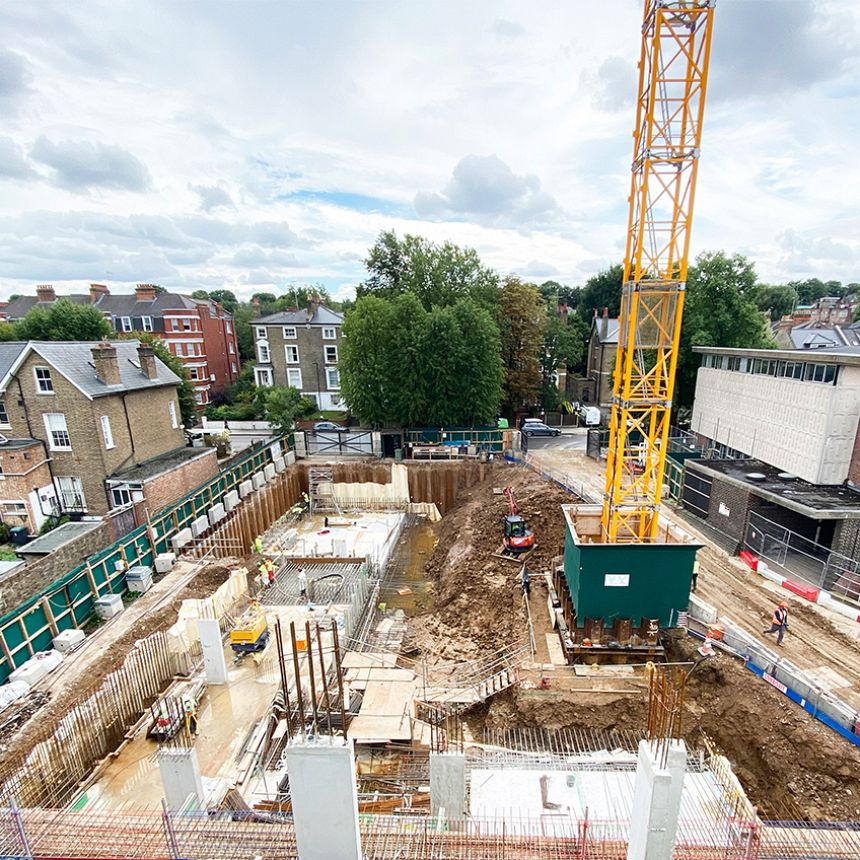 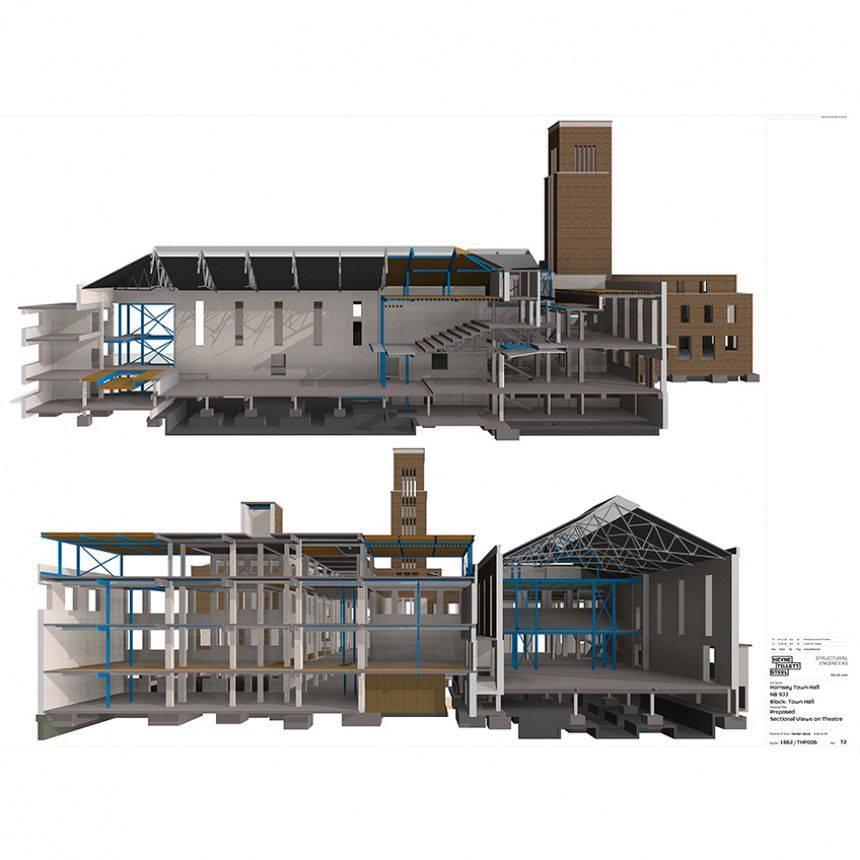 As an environmentally driven practice we proactively push for sustainable and low-carbon strategies to run through all our projects. At Hornsey Town Hall we have applied a holistic approach to sustainable design, addressing economic, environmental and social principles. The majority of the existing structure has been sensitively retained and reused, lowering the embodied carbon and improving the building’s energy efficiency.

The new and structural elements for the Town Hall building have an overall embodied carbon value of 108 kgCO2e/m2, significantly lower than the RIBA 2030 target of 144 kgCO2e/m2 and the LETI 2030 target of 201 kgCO2e/m2 for structure.

Through restoring the brick façade and reinstating original art deco features inside, the building’s architectural heritage has been preserved for future generations. The restoration of the local landmark has opened up a key section of the Broadway, creating a vibrant new centre, employment opportunities and new community spaces for Harringay residents. Once fully complete, the building will be removed from Historic England’s Heritage at Risk list. The restoration of Hornsey Town Hall is one in a number of our listed building projects currently on site and sits within an expanding portfolio of heritage developments.